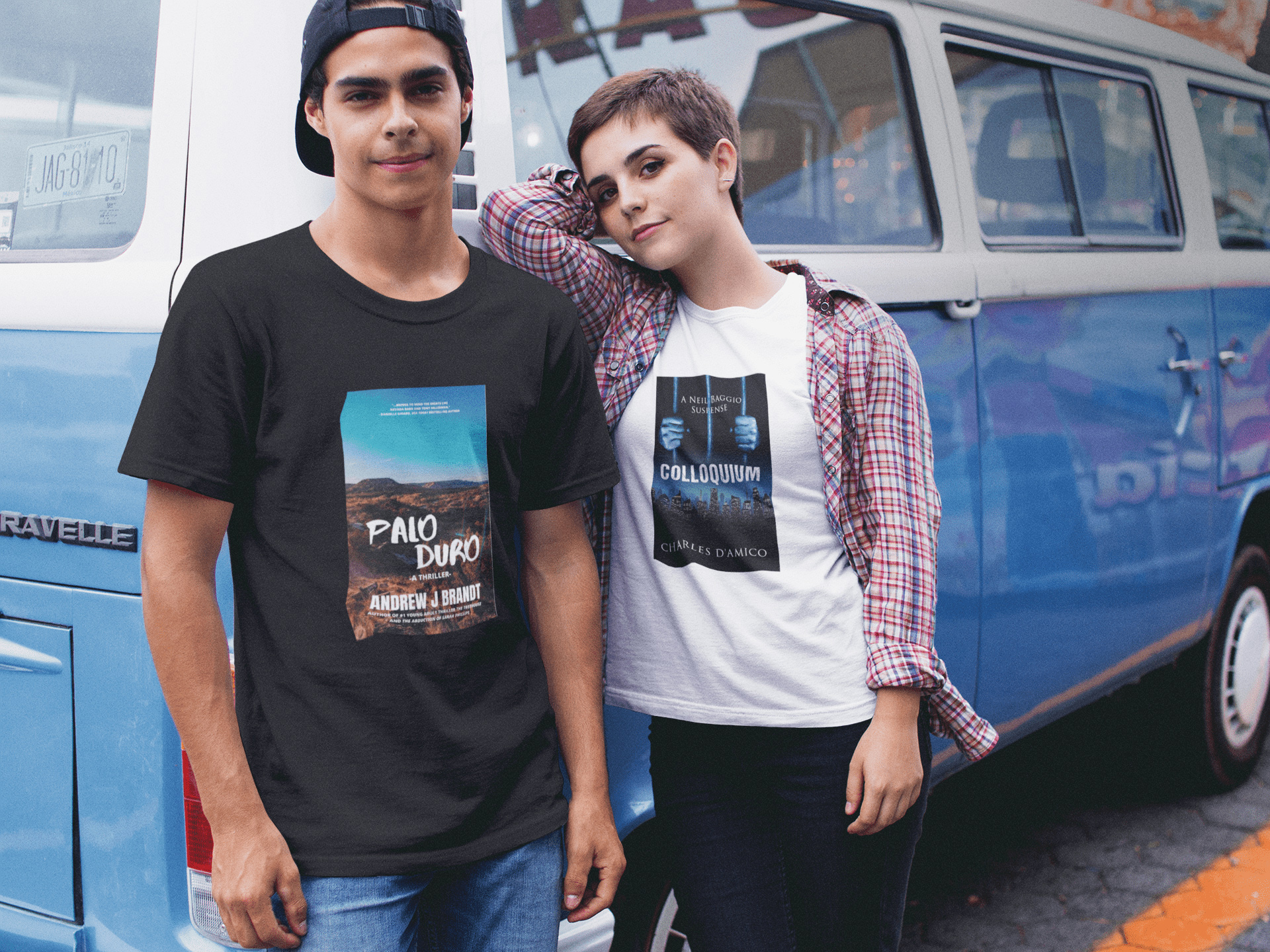 At Blue Handle Publishing we mainly deal in fiction although we are not opposed to publishing nonfiction. We try to be confident in what we operate in, work tirelessly to fill those roles and deliver a great product to our customers and support our authors along the way. Below are 19 popular fiction genres and a handful of nonfiction genres to consider. Keep in mind that there will often be overlap between genres, especially between fiction genres.
‍

Thriller & Suspense  - Thriller & Suspense fiction is often defined by the mood it elicits from the reader, often keeping the reader “on edge” and in a suspenseful state. Cover-ups by the characters are often involved and there is frequently a lack of trust in the characters by the reader with multiple plot-twists being a common element in thriller and suspense books. This is one of Blue Handle Publishing’s favorite genres to work in, and is showcased in the Neil Baggio suspense series as well as Andrew J. Brandt’s novel Palo Duro.

Fantasy  - A genre of fiction that involves an entirely fictionalized universe yet is frequently inspired by real-world myths, legends and folklore. It often includes magic and supernatural elements. The Harry Potter series is a prime example of fantasy fiction from the world that’s built for the reader, to the characters (and the way they interact with each other) and the obstacles they overcome. Blue Handle Publishing currently has two authors working in the fantasy genre, and we’re always looking for new submissions, as well as aiding authors in the process through our Book Puma Platform.

Mystery  - Another one of our founder’s favorite genres, Mystery Fiction has a plot that revolves around an unsolved crime (often murder) and usually inolves a close-knit circle of suspects, all with potential motives, and a central detective. The crime usually remains unsolved and mysterious until the end. A prime example of mystery fiction is the Sherlock Holmes detective series. Charles D’Amico’s Neil Baggio series also falls under Mystery fiction along with Thriller & Suspense and Contemporary.

Action & Adventure - A genre of fiction where the element of danger constitutes the primary focus. Survival stories and war stories are prime examples of Action & Adventure fiction, and the pace of the plot usually moves quickly and includes significant physical action by the protagonists and characters involved.

Romance  - A type of genre-fiction that depicts the story of two people who become intertwined romantically, fall in love and usually has an optimistic ending. Romance novels have a lot of sub-genres and often overlap other genres like fantasy fiction, contemporary, historical romance, paranormal fiction, and science fiction.

Contemporary Fiction  - Tells a story that takes place in present times, and includes elements of everyday modern life. Contemporary fiction uses an environment and setting that involves the current world around us. Contemporary Fiction will often overlap with other fiction sub-genres such as coming-of-age or romance.
‍
One of our authors, Andrew J. Brandt from Blue Handle Publishing is a popular writer of contemporary fiction, while also mixing with Young Adult and Thriller genres. Another contemporary fiction novel from Blue Handle is One Golden Day, where Charles D’Amico writes a coming of age tale dealing with life and the reflection many have on their wedding day, from the view of the groom Travis Golden.

Science Fiction - Often shortened to “Sci-Fi”, Science Fiction is a genre of fiction that involves themes of technology, space explorations, extraterrestrials and other ideas that explore the societal implications of advances in scientific knowledge and technology. It is often futuristic in nature while still retaining facets of scientific truths or theories that currently exist.

Dystopian  - Often considered a subgenre of Science Fiction, dystopian fiction explores the fictional status of societies and their ability (rather inability) to function and provide prosperity to citizens and society. It involves themes of political oppression, wealth distribution, public mistrust, mass poverty and oppression.

Speculative Fiction - A broader category of fiction that involves elements non-existent in the present and can include but is not limited to sub-genres such as dystopian fiction, horror fiction, science-fiction, and fantasy.

Horror - Often a subgenre of speculative fiction, horror fiction involves themes of disgust, fear and psychopathic behavior. It can be divided further into psychological horror, including but not limited to murderers, serial killers, cults and psychopaths, and supernatural horror which can involve the presence of supernatural elements such as ghosts, demons and satanic themes to name a few.

Historical Fiction - A genre of fiction where the plot takes place at some point in the past, and depicts a story that “could” have happened, but didn’t, during an historical time period. The writing reproduces social manners, conditions and societal details of the specified period in which it takes place. For example writing a western and using true, historical data for towns, people, and the technology they interact with (telegraph vs telephone, etc). Some of the more famous Historical Fiction novels are The Davinci Code by Dan Brown and Cold Mountain by Charles Frazier.

Women’s Fiction  - A genre of fiction that focuses on stories centered around women, personal growth and the feminine experience and is also promoted to women. As of now there is no comparable genre for men.

LGBTQ+  - A genre of fiction that depicts elements and struggles of queer lifestyle, environments and characters.

Literary Fiction - Fiction that is often nominated for prestigious awards, and the writing is considered high-brow or high-culture, and regarded as having high literary merit. Plot is not always a central concern and literary fiction often involves reflection on politics and/or the human condition. Can easily overlap with other fiction genres.

Graphic Novel - A narrative that includes creative graphics and illustrations to help tell the story. Similar to, but typically differentiated from, comic book series, graphic novels can stand alone and are published as a book rather than a comic.

Short Story - A piece of prose fiction that can typically be read in one sitting, and usually covers one incident, or a series of self-contained incidents that tie together.

Young Adult - Often shortened to (YA), is a genre of fiction that is usually meant for ages 12-18. The subject matter can vary widely from coming-of-age to romance and fantasy and is meant to appeal primarily to adolescents although many older readers enjoy YA novels for their readability.

Children’s  - A broadly defined genre of fiction including stories, poems, books and other written pieces made specifically for children or to be read to children. These can include fairy tales, picture books, fables, lullabies and other pieces of work meant for a younger and more developing audience.

New Adult - A newly defined genre of fiction that could be considered an extension of young adult fiction, or the bridge between Young Adult and Adult Fiction, often depicting stories around characters between the ages of 18-25.

Memoir & Autobiography - A genre of nonfiction where the author provides a true account of one’s life or a portion of one’s life. Autobiographies are typically more chronological in nature whereas memoirs tend to be more steeped in emotion and capture the most defining moments of an author’s life.

Biography - A genre of nonfiction where a true account of someone’s life (not the author’s) is depicted and explored. The person’s life being detailed is generally well-known, famous, and can often provide interesting wisdom or a lesson to the reader.

Food & Drink- This mostly encompasses cookbooks, and is a highly saturated market in this day and age as nutritional and lifestyle preferences are constantly in flux. It’s important to keep this in mind when writing and developing a Food & Drink book and try to find a specific niche that sets you apart from the multitude of cookbooks out there.

Art & Photography - These books range in subject matter but what ties them together is the love of art. These books can explore art methods, say oil painting or ceramics, and can also showcase a particular artist’s work.

Self-Help - Also known as self-improvement books, self-help is written to help the reader make a change or improve an aspect or element of their life, and acts as a formal, tangible guide to the reader. They often focus on psychology and human behavior.

History - Any book that gives an account of a true historic time period, person or event. History nonfiction takes lots of research and time to make the account accurate and true. The point of the book is to educate and inform, but takes a more storytelling stylistic approach rather than a text-book approach.

True Crime - A book that chronicles the account of a real crime or criminal episode that was actually committed, often detailing the psychology of the criminal’s minds and what led them to commit the crime and the details surrounding it. One of the most famous and well-written true crime novels is In Cold Blood by Truman Capote.

Humor  - The humor genre of nonfiction often overlaps with the memoirs and essays of the non-fiction genres. They can be laugh-out-loud and satirical and include authors like Tina Fey and David Sedaris.

Essays  - Much like the short-story format, but the collections of stories surround real life and actual events and offer up a social commentary on the subject matter being tackled. Many powerful voices exist in this genre including the likes of James Baldwin and Roxane Gay.

Business & Investing  - A genre of nonfiction that focuses on tips, tricks and strategies for growing and running businesses or offers up advice on financial security, retirement, ventures, stocks and other economic, finance and business related subjects. One of the most popular Business & Investing nonfiction books is Rich Dad Poor Dad by Robert Kiyosaki and Sharon Lechter.

Health & Lifestyle  - Books that focus on the overall health and condition of the human body, as well as lifestyle strategies and modes of living that contribute to both mental and physical wellness. Health & Lifestyle books cover a range of topics including diet, sex, mental illness such as anxiety, mindfulness, relationships and parenting.